Pamela Ware, a Canadian diver, made a disastrous error during Saturday’s semifinal of the 3-meter springboard event at the Tokyo Olympics and placed dead last.

Ware leaped off the board and fell into the water with a splash, landing on his feet. She scored a total of 245.10 out of 300, which put her in 18th position.

Twelve divers placed high enough to go to the medal round. Ware informed the media that she may have avoided harm if she had failed at the attempt. 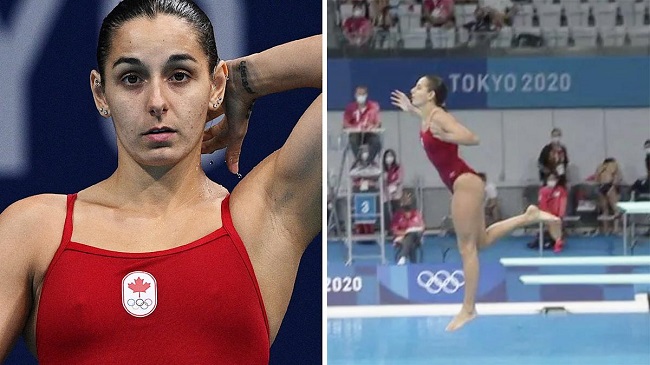 Ware won a gold medal at the 2019 Pan American Games in Lima, Peru, and went into the Olympics riding high on that success. In the synchronised 3-meter springboard event, she placed first.

She competed in the 2015 Pan American Games in Toronto and the 2015 World Championships in Kazan, Russia, where she earned two silver medals.

The 28-year-old was participating in the 3m springboard event for the first time at the historic tournament in Tokyo.

She had planned to attempt a dive with a difficulty level of 3.5, but a misstep in her approach forced her to abort the attempt at the last minute.

This resulted in Ware effectively completing a pencil jump into the pool, which he promptly did. She was eliminated from the competition after the unsuccessful dive, which was scored a 0.0.

When asked about the incident, Ware said, “I think that if I would have done the dive, I may have probably hurt myself.”

In a follow-up Instagram video, she elaborated, “I am going to express that I am really proud of myself. The pinnacle of difficulty.

What you see from the opposition is only a small part of the work we put in to reach to the top. And here I thought I was prepared for the competition, and I blew it.

After a disastrous error in the 3-meter springboard semifinals at the Tokyo Olympics on Saturday, Canadian diver Pamela Ware promised she wouldn’t be leaving the sport.

Ware leaped off the board and fell into the water with a splash, landing on his feet. She scored a total of 245.10 out of 300, which put her in 18th position. Twelve divers placed high enough to go to the medal round.