The governor of Florida, Ron DeSantis, is not a moron. Ambitious and cynical, however, he is. There is value in wondering why he says things that sound dumb.

And his most recent comments on COVID-19 shed light on why the disease continues to claim the lives of so many Americans.

The state of public health in Florida is deteriorating rapidly in the background of this story.

Every American who is at least 12 years old now has access to very effective immunizations.

A lot of attention has been paid to “breakthrough” infections caused by the delta variation, but they are extremely uncommon. 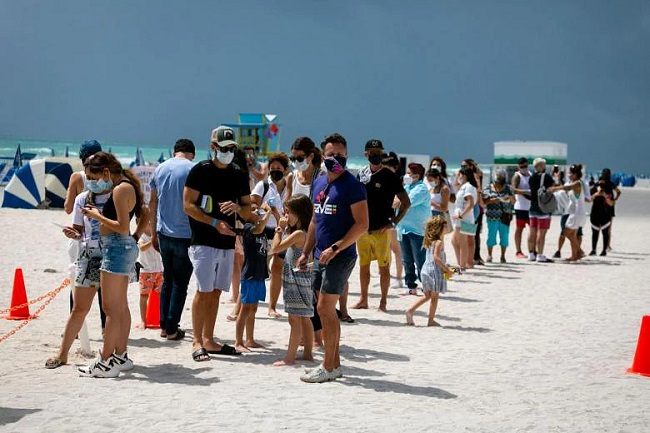 Vaccination-related sickness is more rarer. There is no reasonable reason why we are still in the midst of an epidemic that is ravaging our nation.

However, Florida is experiencing a COVID rise that is worse than it was before the immunizations were introduced.

In comparison to New York, which has a population of about the same size, more than 10,000 Floridians are hospitalised.

An average of 58 Floridians die each day, compared to six in New York. In addition, the health care system in Florida is in a precarious position.

When was the Florida Delta Variant Disaster Declared by the Government?

A state of emergency was declared in early March 2020, and the first of several executive orders reopening the state was issued in April.

By June 2020, restaurants, bars, gyms, and movie theatres had reopened, and public schools had returned to session.

All municipal Covid-19 limitations, including the mask mandate, were put on hold in May 2021 after Mr. DeSantis signed legislation permanently eliminating the restrictions.

Last summer’s Delta wave devastated Florida, yet no additional limitations were placed by the Sunshine State.

Journalists and other supporters of tough Covid measures turned the state into a punching bag. On Twitter, the hashtag #DeathSantis would come and go.

Traditional beliefs regarding Covid-19 have changed after the Omicron spike. An oncologist and two other doctors who advised Vice President Joe Biden’s transition.

He wrote in the Journal of the American Medical Association on January 6: “The virus is here to stay.” In other words, there will be no more “perpetual state of emergency.”

There will be no “eradication or elimination” under the “new normal,” according to the author.