At the beginning of the Battle of Winterfell, Melisandre returned in dramatic fashion by appearing on the battlefield and lighting fire to the Dothraki’s arsenal.

Later, in an effort to safeguard Winterfell, she lit the trenches on fire, and in her final act, she gave Arya Stark the ultimate pep talk before she went on to slay the Night King.

What she said to Arya has many viewers wondering what will happen to the teenage assassin, as hints dropped in earlier seasons finally come to fruition. 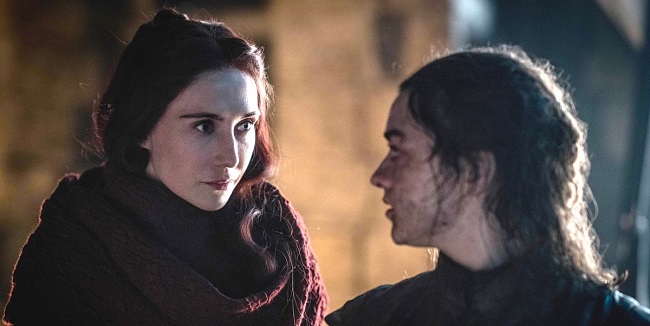 Melisandre’s prophecies, made during an earlier encounter between the two protagonists, have begun coming true.

Fantasy drama series Game of Thrones was developed by David Benioff and D. B. Weiss for the American cable channel HBO.

Based on George R. R. Martin’s epic novel series, the first book in the series is titled A Game of Thrones.

While “The Climb” focuses more on Jon Snow and the Wildlings’ ascent of the wall and the subsequent ascent of the ladder of chaos in King’s Landing, it does provide a key scene for Arya Stark.

Arya is with the Brotherhood Without Banners when Melisandre comes to take Gendry for his blood. That incident prompts Arya to break off contact with the others.

But it’s also where Arya meets Melisandre, who seems to fulfil a prophecy she’d been given about closing many eyes for good, “brown eyes, green eyes, blue eyes.”

The first two episodes of the eighth season of Game of Thrones were filled with reunions: Arya and Jon, Jaime and Tyrion, Brienne and Jaime, and Jaime and Tormund.

The third episode of the season, titled “The Long Night,” featured the longest battle sequence yet committed to film.

Thus there wasn’t as much time for friendly catch ups. Melisandre, the Red Priestess, did make a comeback, however.