At the Olympics, no swimmer has ever needed saving, but on one infamous occasion, lifeguards were almost required.

Eric “The Eel” Moussambani of Equatorial Guinea battled to finish his race in the 100-meter freestyle at the 2000 Sydney Olympics, creating a legendary Olympic moment.

Moussambini, who had just recently begun swimming months before the Games and had never seen an Olympic pool before landing in Sydney, barely made it to the finish line without assistance. 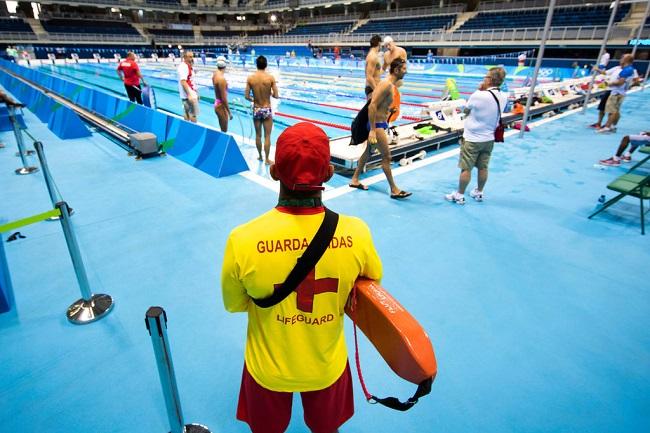 Although it might seem futile, there are lifeguards required to be on duty during the Rio Olympics due to regulatory requirements.

Any public pool that is larger than a specific size in Brazil is required to have lifeguards, according to Ricardo Prato, sport manager for aquatics.

We would also prefer not to have them, but we are compelled to.

But don’t feel too sorry for them; their two weeks of labour, which mainly consisted of watching the Olympics, paid them roughly £260.

Here’s Why There are Lifeguards at the Olympics

You would think that lifeguards wouldn’t be necessary in a pool filled with the best swimmers in the world.

Nevertheless, a squad of 75 guards is on duty at the Rio Olympics to keep an eye on all the aquatics competitions.

Why? According to the New York Times, it’s just an extra precaution that is probably unnecessary.

Despite the fact that no athlete has ever perished in an Olympic pool, some aquatics competitions can be risky.

Divers have been known to smash the water, synchronised swimmers have sustained sports concussions, and water polo is a physically demanding contact sport.

The Times was also informed by a lifeguard supervisor that athletes ran the risk of suffering heart attacks, agonising cramps, and head-on collisions with the pool walls.

However, if everything goes according to plan, Rio’s lifeguards won’t ever need to leave their seats.

Even while their job isn’t particularly interesting, they do have a terrific view of all the Olympic activity.

Why Swimmers Need Lifeguards at the Olympic Pool: ‘It’s a One-in-a-Million Type of Event’

The world’s top swimmers can always reach a buoyant lane marker in the Olympic pool, which is only a few strokes away from the pool wall.

They are under the continual observation of many coaches and assistants.

During a training session this week, Phelps sailed by, practising for the competition that starts on Saturday, stroke after stroke and lap after lap.

The only people in the arena were a few coaches, volunteers, and security personnel.

However, two men in red trunks who had flotation devices tucked under their arms and whistles around their necks were the ones who were most intently observing from opposite sides of the pool deck.

Though lifeguards do much more than simply watch the water, that is probably how most of us picture them.

While it might seem like they are watching the water, they are actually monitoring the conditions, assessing each swimmer’s competence.

And making sure that everyone who is close to the water is safe. They want to safeguard each swimmer and keep them from getting hurt.